Welcome To The Tennis Section

The tennis section runs tournaments, teams in leagues, club sessions, a busy coaching programme and offers a booking programme for all members to play when they want within the times available.

The idea of these sessions is to allow members to play without pre-booking a court and to play and meet other members, there is no charge for these sessions. Wednesday and Thursdays sessions are drop in, but the Sunday Session is arranged by email, with players being asked on a weekly basis whether or not they are able to play on the next Sunday morning. Available players will be allocated to “fixed fours” on a first-come, first-served basis. Contact Tennis Chairman Al Clark by email (alrosclark@gmail.com) if you would like to be added to the current list of Sunday Club Session players.

There is a drop-in coaching sessions for adults (no need to book small fee payable):

A draw for Wimbledon Tickets takes place annually. If you would like to be eligible for the draw, you need to be a British Tennis Member and need to opt in. The 2021 Championships ballot is not yet open. More inofrmation will be provided when it is. To opt in - click on the link.

All those playing in teams should be a British Tennis Member. This is free to join and also enables the Club to access more Wimbledon tickets for the members.

If you would like to become a British Tennis Member click here. If you need a Lawn Tennis Association (LTA) Rating or more information about this click here

Click here for more general information about the LTA.

Pictured below are tennis players who were honoured during the Club AGM on Monday 25th Feb 2019.

Left: Pete Jelly (r) being awarded the Hideko Edes Trophy, for the most improved tennis player, by the Tennis Chairman, Keith Mason (l) (this was presented at a later date as Pete couldn't make the AGM) 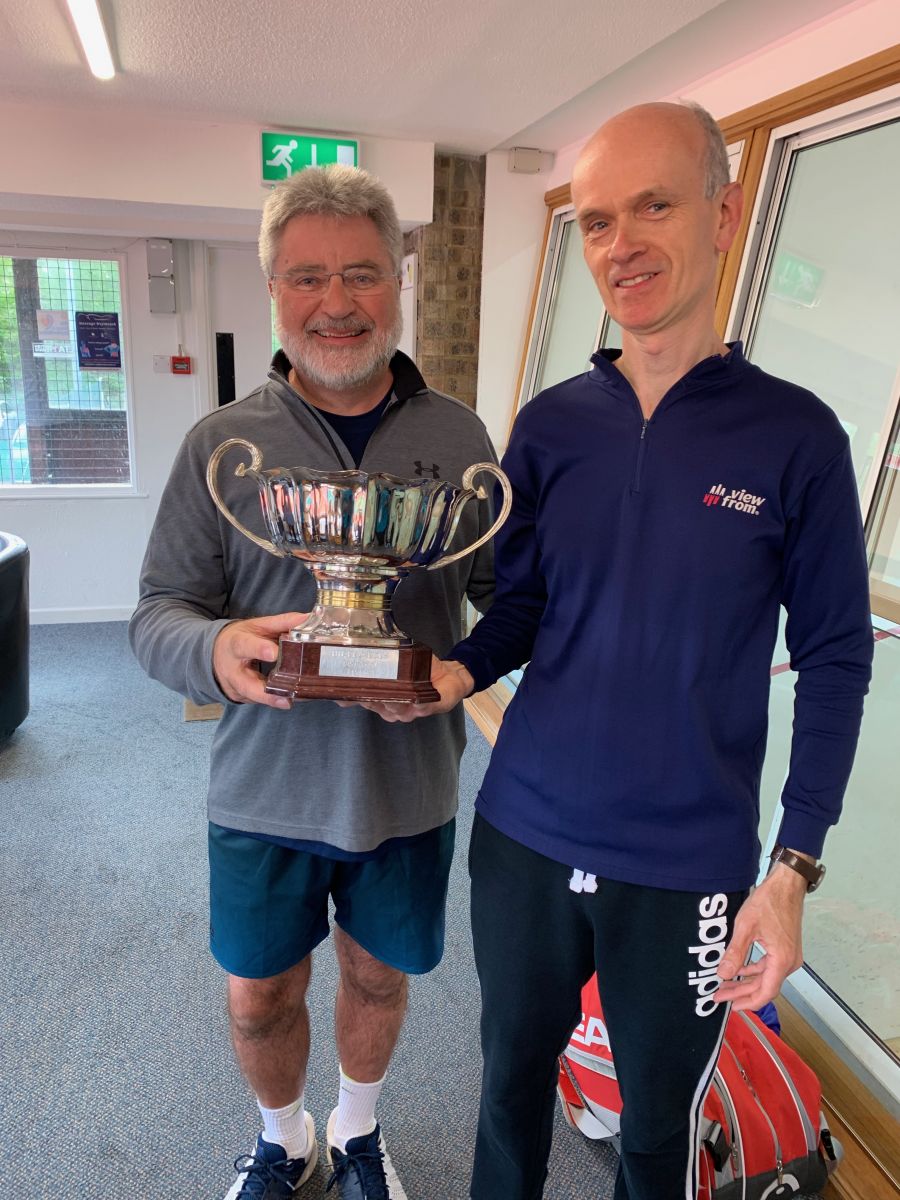 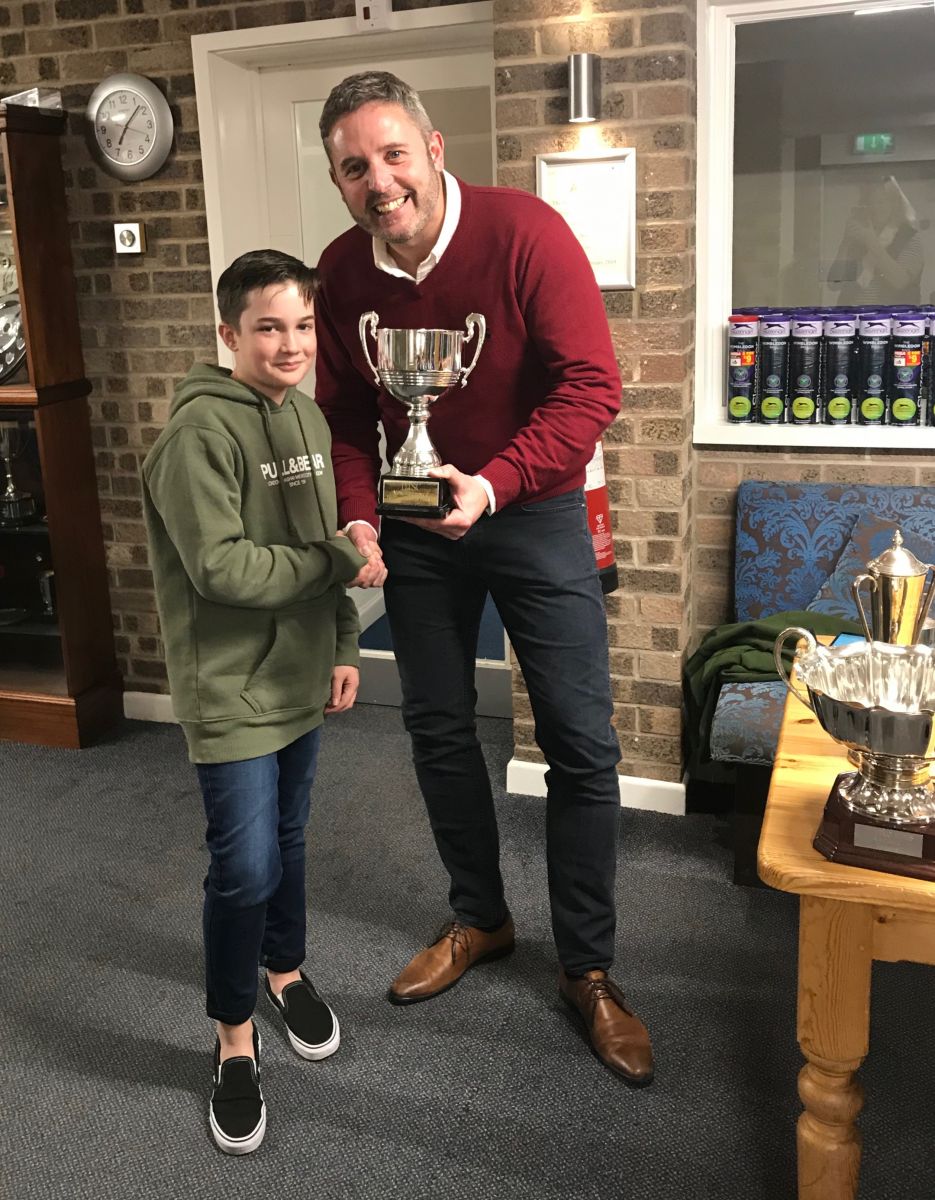 The Club's new artificial clay tennis courts were officially opened by Councillor Mary Penfold WDDC at an opening ceremony held on Saturday 19th Jan 2019. More details and photos are at the link. 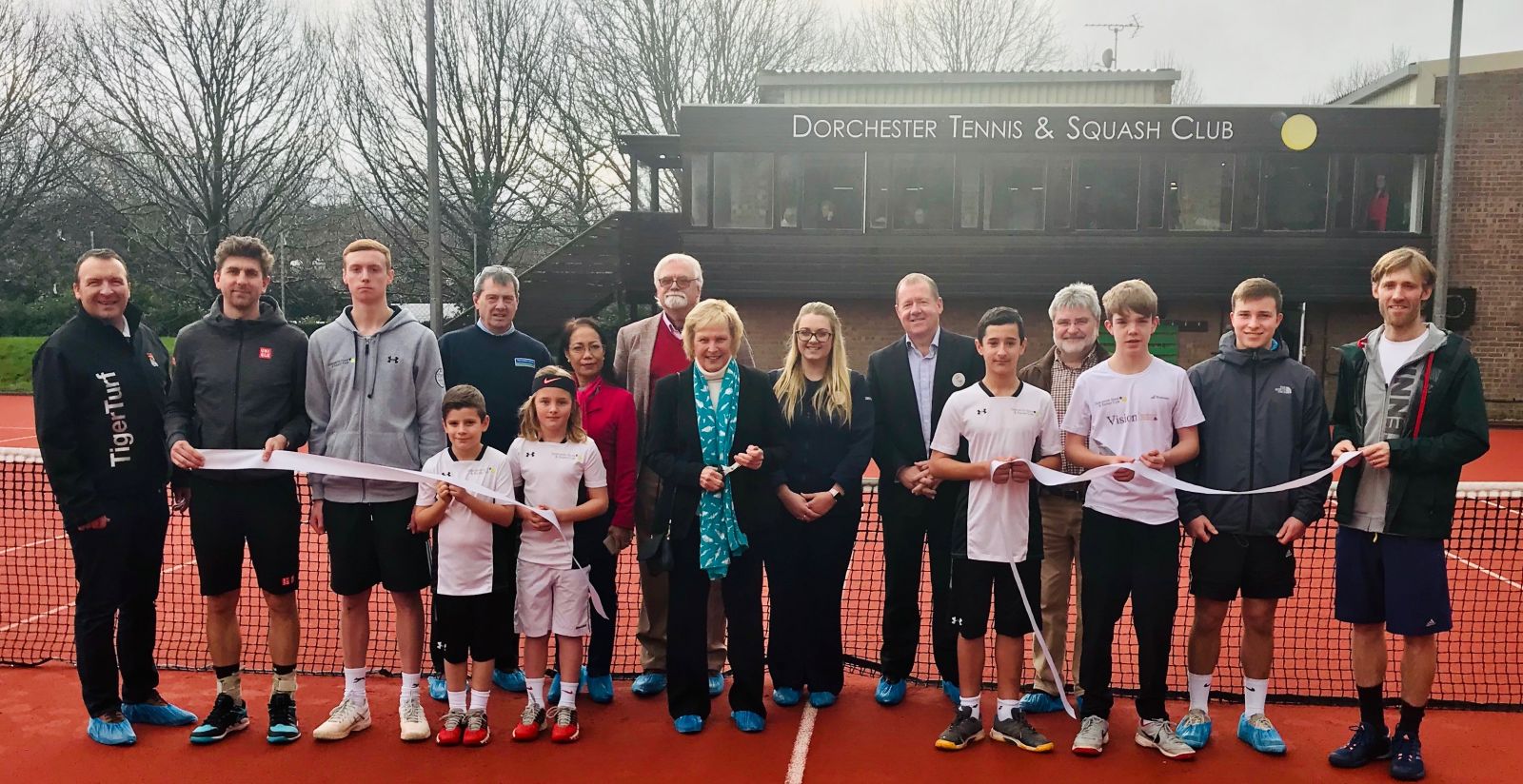 Pictured below are tennis players who were honoured during the Club AGM on Monday 26th Feb 2018.

Left: Mike Williams being jointly awarded the Club Person of the Year Trophy with Janet Biles, by the Club Chairman, Neil Foster. 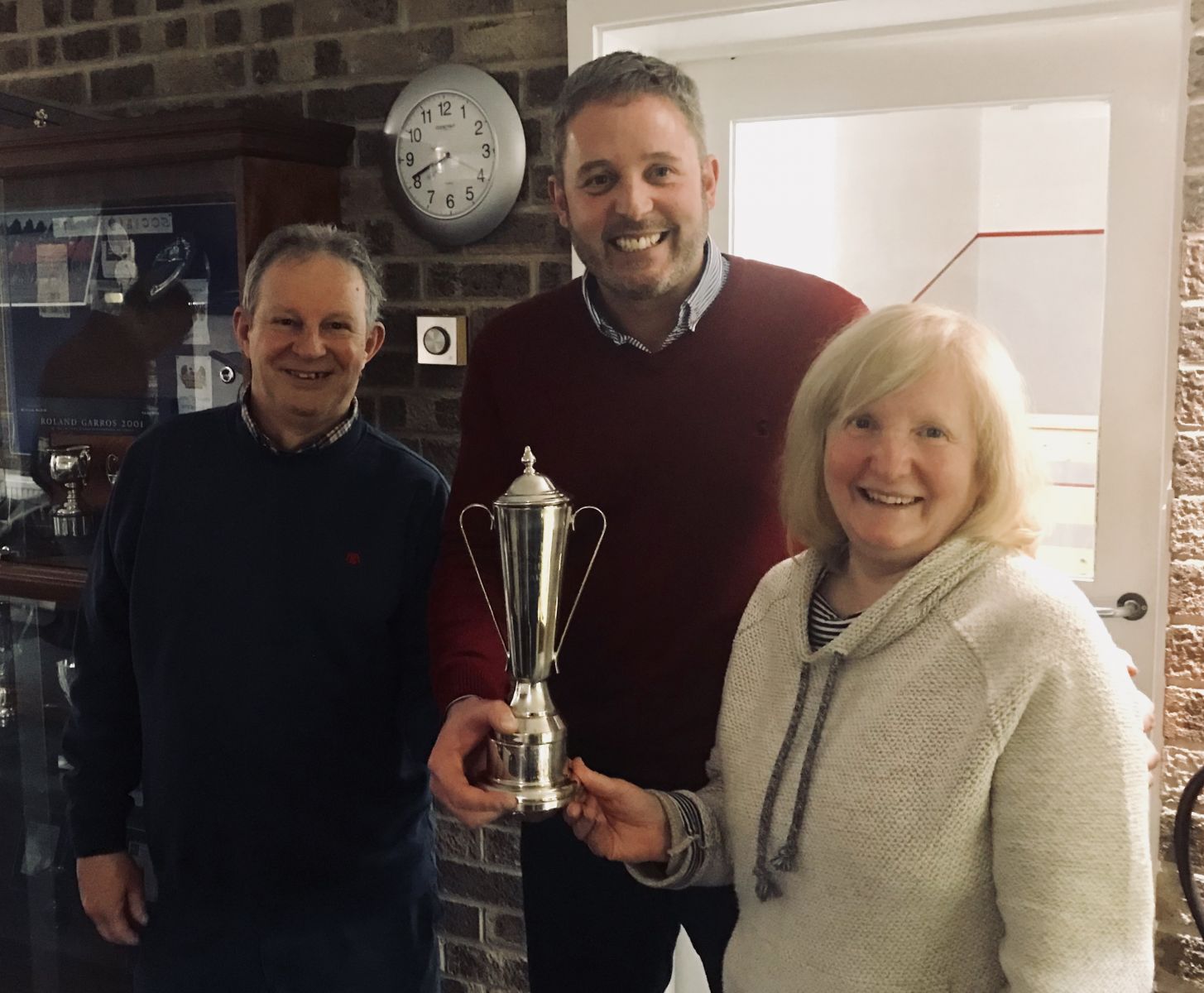 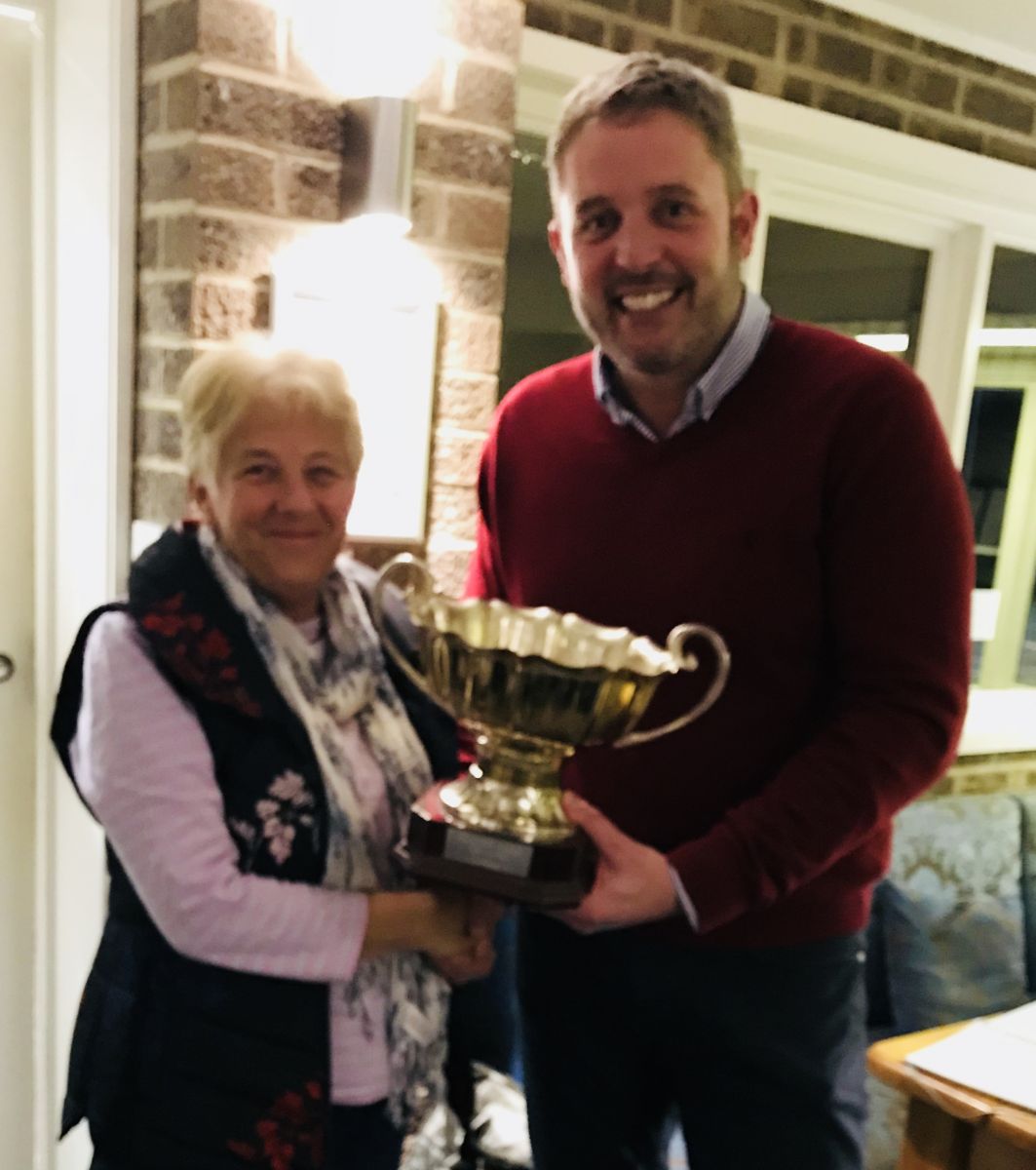 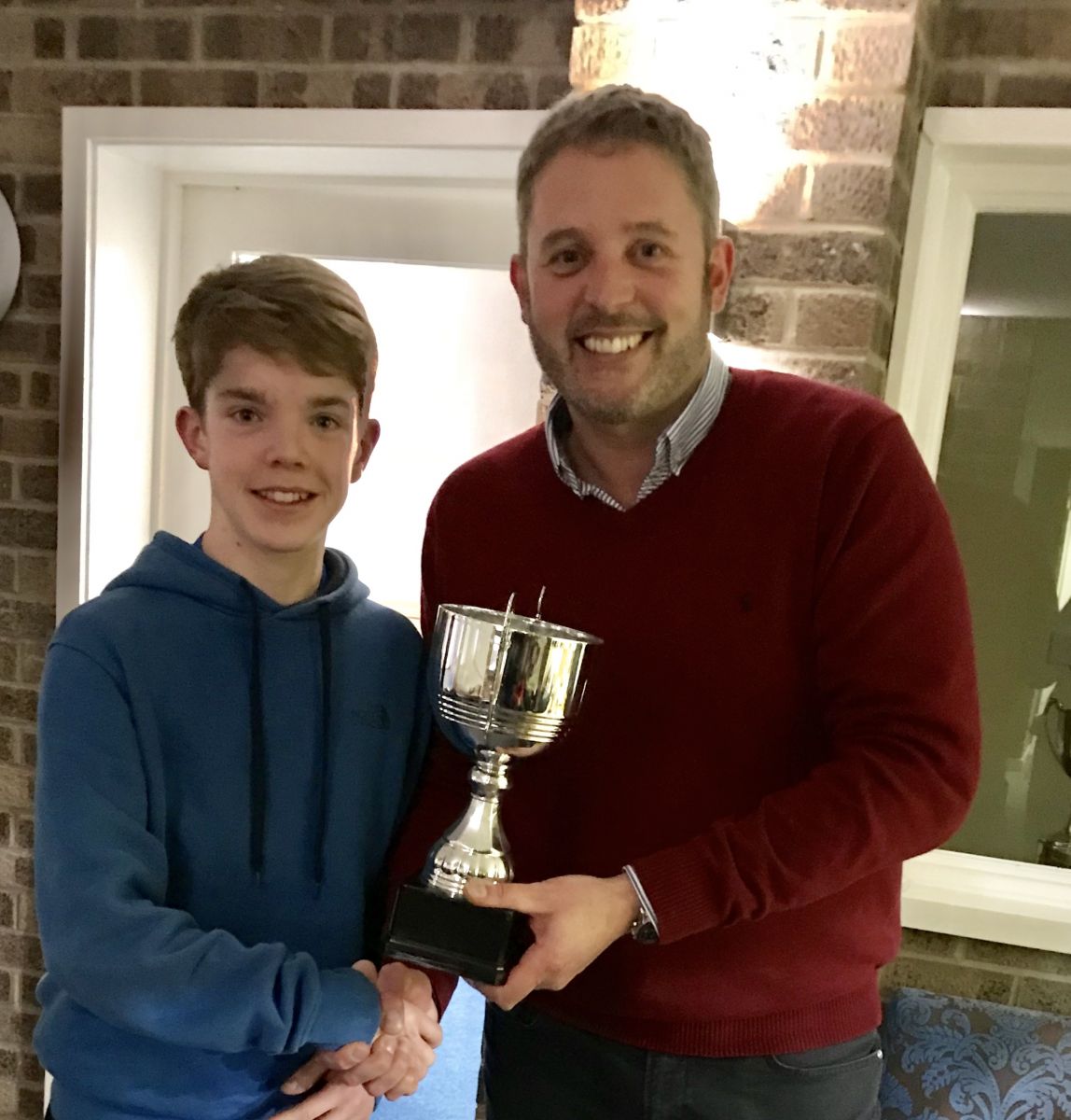 Pictured below Joe Chambers (left) who was awarded the Hideko Edes trophy for the most improved tennis player 2016/17 and Greg Charles (l) and Matthew Smith (r) (photo at right) who were jointly awarded most improved junior tennis players 2016/17 presented at the AGM on 27th Feb 2017. 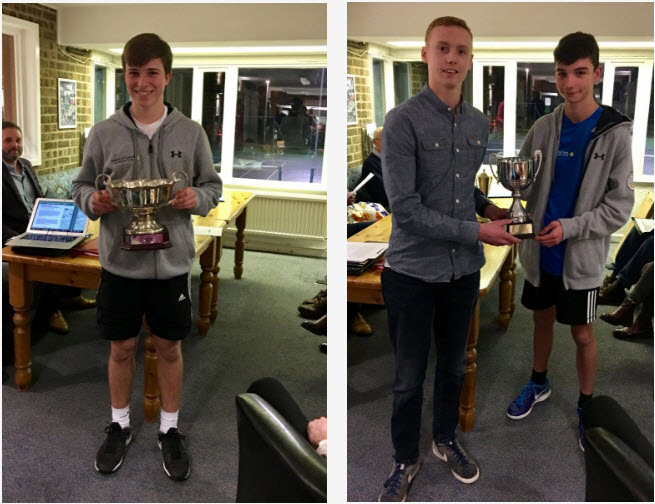 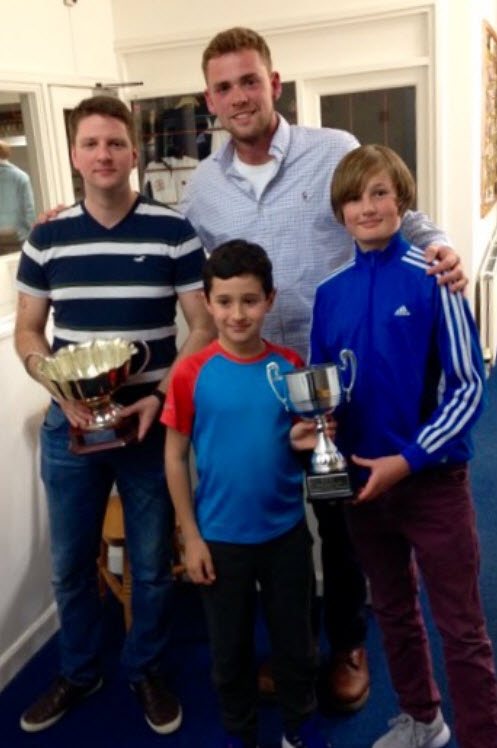 Pictured below the Club's most improved tennis player of 2014, James Tindall. The cup was presented to the surprised recipient by Kevin Willemse at the AGM in March. 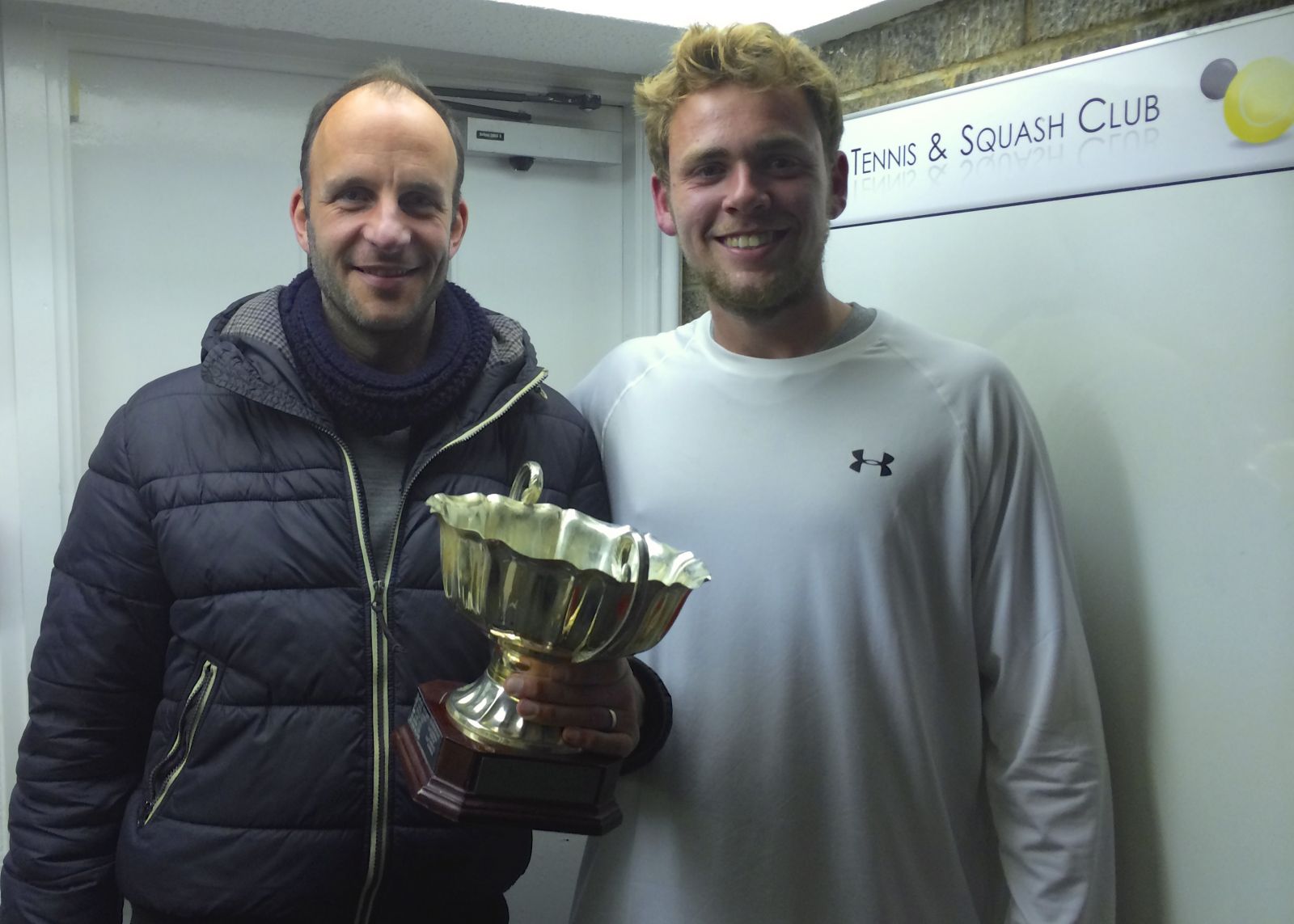 Pictured below the joint winners of the most improved junior cup for 2014 : Alex Barker and Charlie Barnett 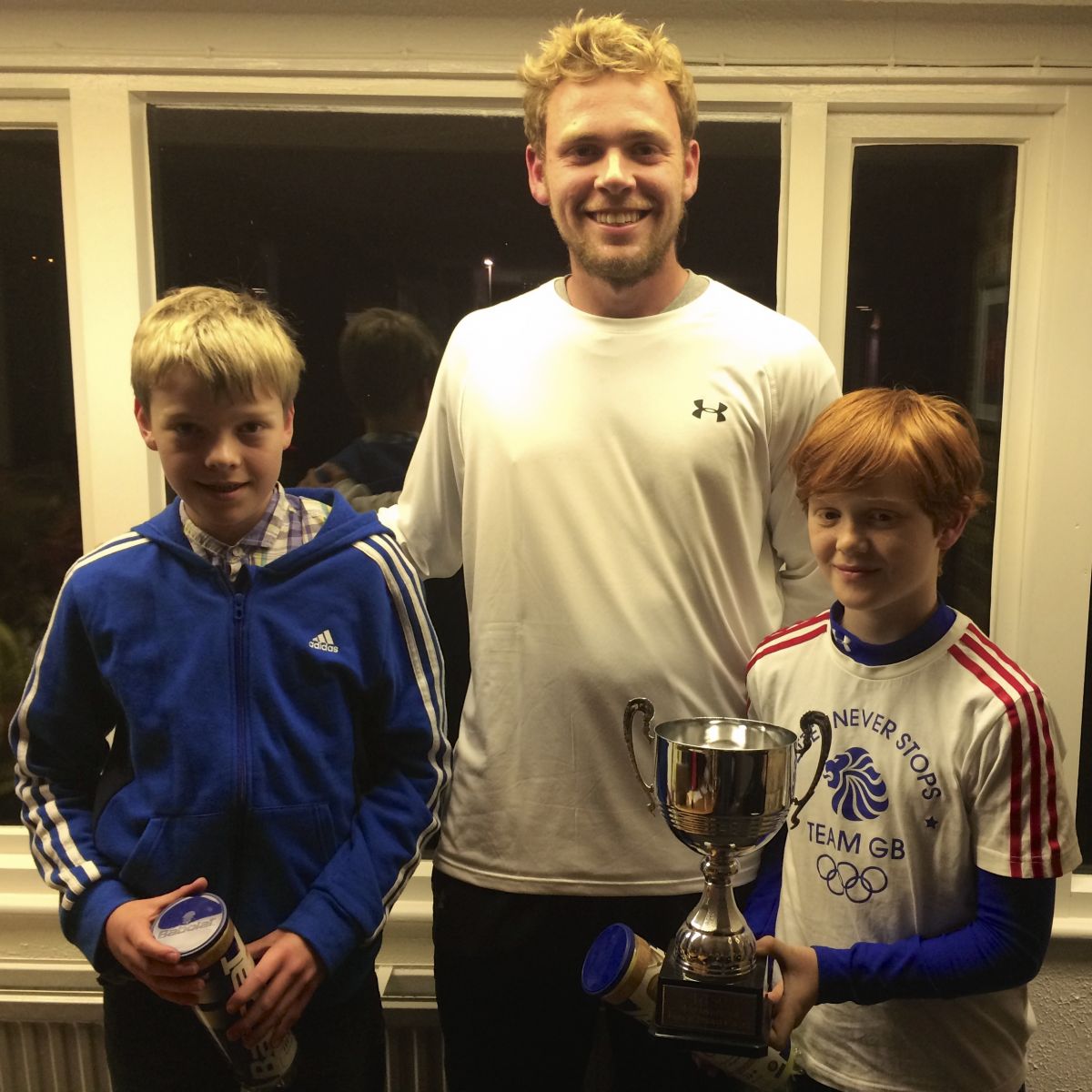 Pictured below the Club's most improved player - the joint holders for 2013 : Jennie Warrack and Adam Lawrence 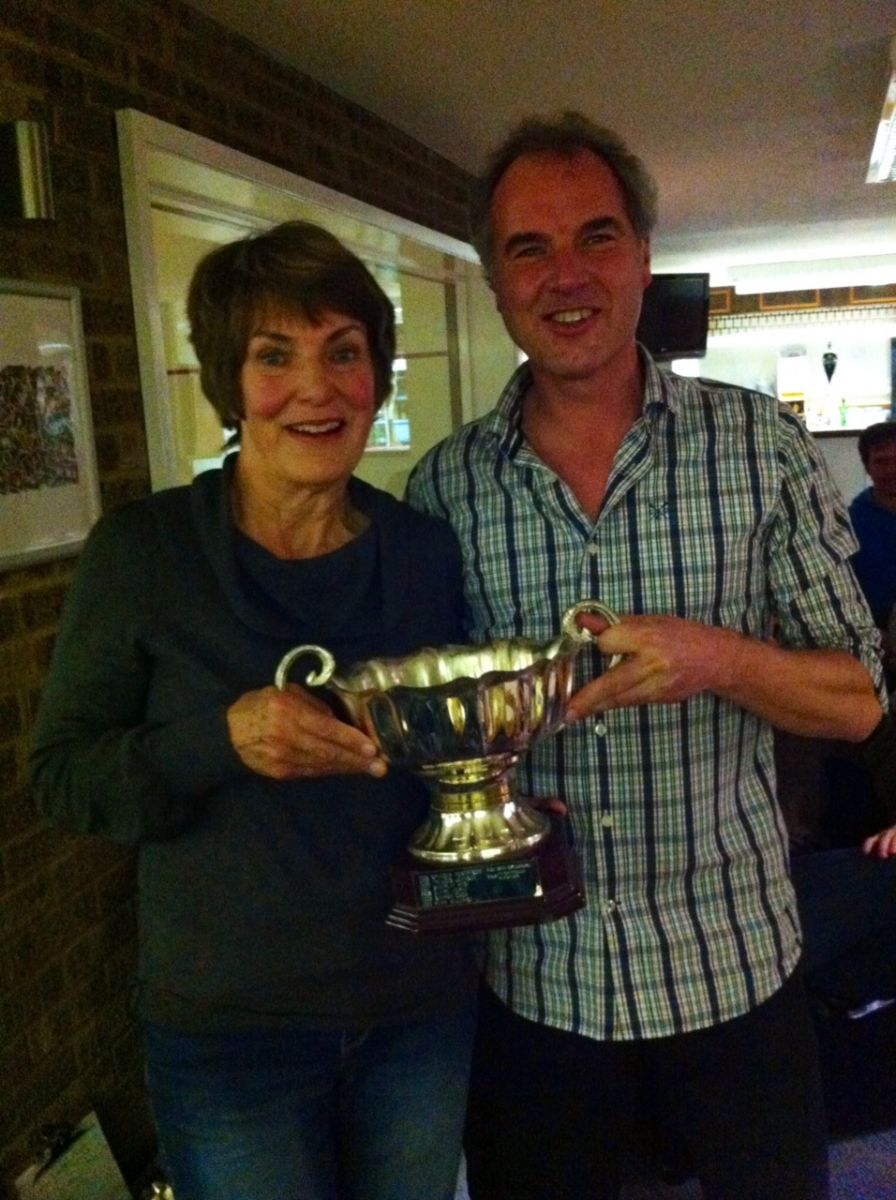 Entrants to Peter Cox Fun Handicap Tournament May 2013 (below) 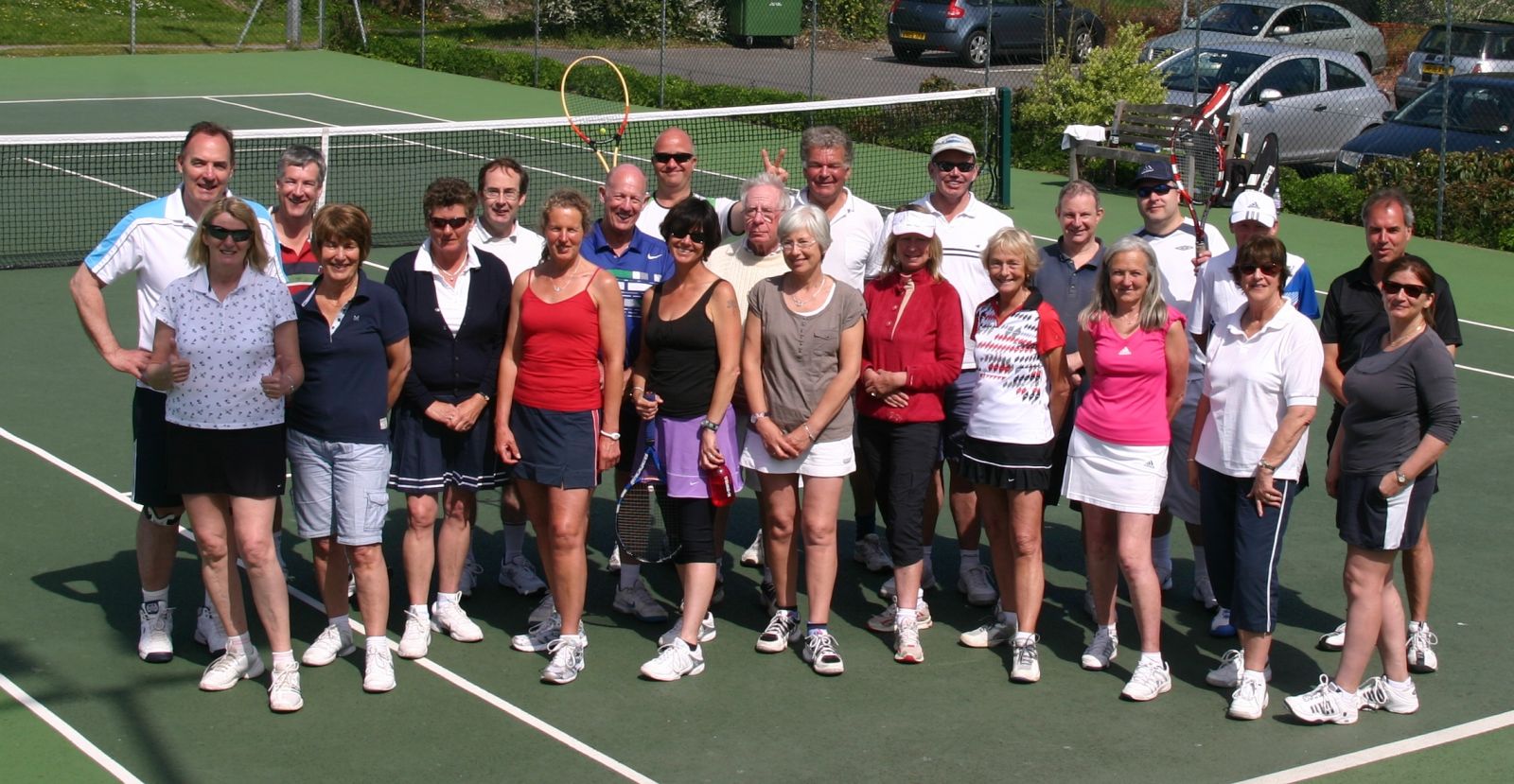 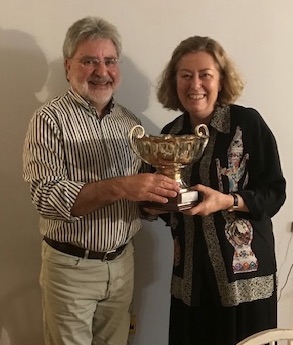 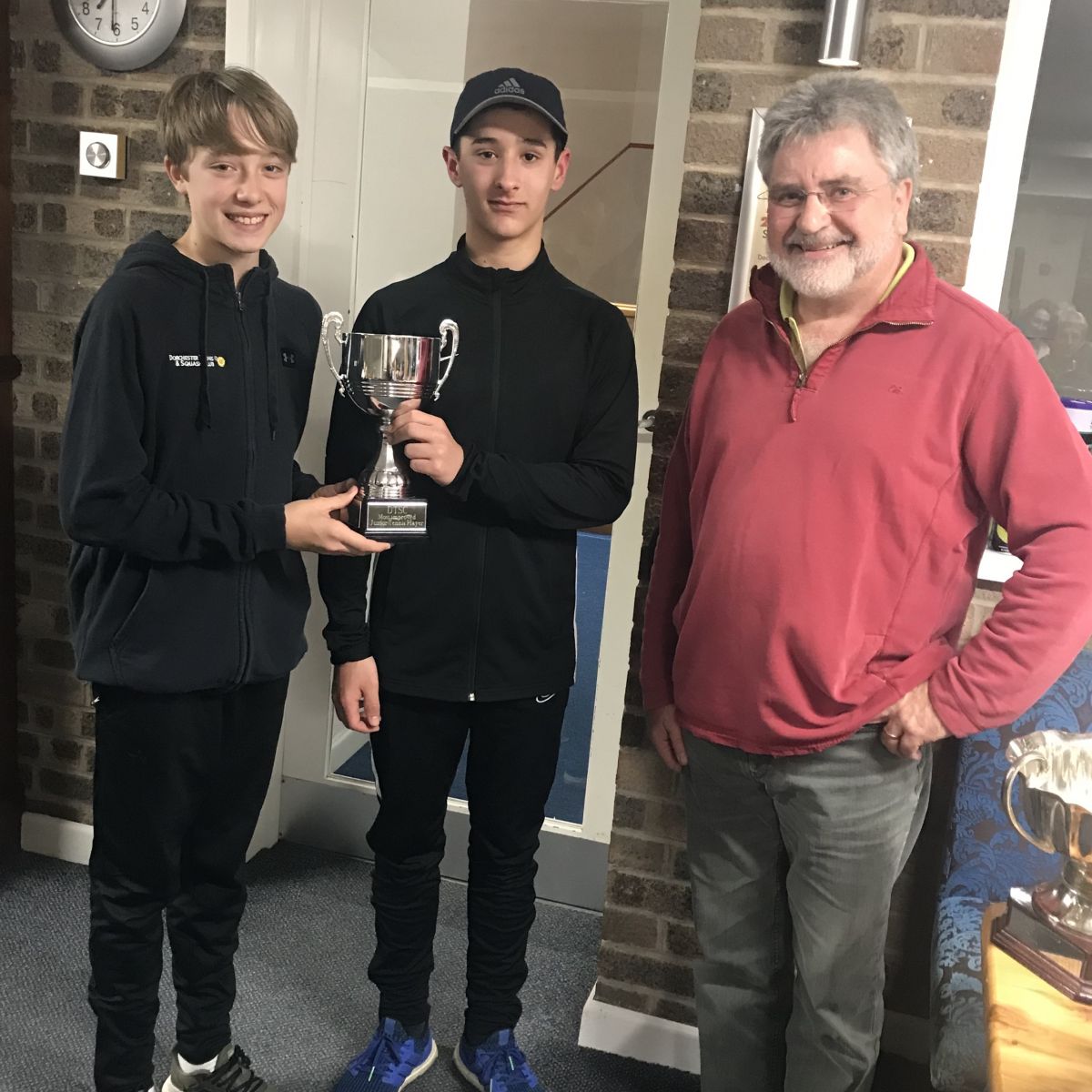 Due to the latest National Lockdown, the Club is closed with immediate effect....